skip to main | skip to sidebar

MASTER OF THE BIAS

If Vionnet is known as the inventor of the bias gown in the 1920s, it’s fair to call her the Mistress of the Bias.  After all, American designer Charles Kleibacker earned the title “Master of the Bias” in the 1960s  Kleibacker is not a label that comes to Decades often enough, but I have always found his history quite interesting.  Born into a retail in Cullman, Alabama, Kleibacker started his career as a journalist, worked as a bit of a “Mad Man” in advertising for a NYC department store, and then when living in San Francisco met the famous cabaret singer Hildegarde and joined her entourage as a chauffeur!  (For those who know my cabaret past, you can imagine how cool this factoid is to me.  I actually shared a stage with Hildegarde back in the 1990s).  It was while joining Hildegarde on a European tour and waiting for her during a couture fitting at Christian Dior that he realized his passion for fashion and from 1954 to 1957 he worked as an assistant to Lanvin’s  Antonio del Castillo. Kleibacker opened his eponymous house in 1960 and his gowns cost around $1500 and were very labor-intensive.  Upon retiring from fashion, he went on to become a museum curator and professor. In can be evidenced by this silk chiffon gown of a “kashmir” print that Kleinbecker knew his way around fabric and beautifully manipulates this Hindu motif print of foxes, rams, and other lucky charms into a silhouette reminscent of a sari, but toally ready for Hollywood or Bollywood!
-Cameron 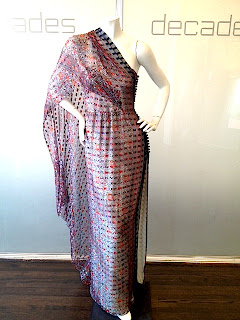 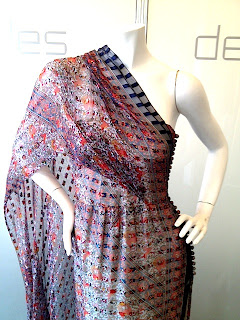 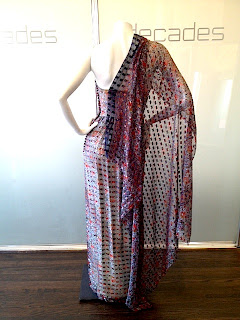 For additional information, please email blog@decadesinc.com or call + 1 323 655-1960. You may also visit us in person at Decades 8214 Melrose Avenue in Los Angeles, California. Please reference the description above, if calling or emailing.